Premier Pet Hospital is here for you and your pet when emergencies arise. Unfortunately, xylitol toxicosis is a common canine emergency, and if you suspect your dog has ingested xylitol, immediate urgent care is critical. Depending on the amount ingested, canine xylitol toxicosis can be fatal. Read on to learn where xylitol is found, how dogs are affected, and what to do if your dog is exposed.

Xylitol is found in many household items and foods

Most people know that many sugar-free chewing gums and candies are made with xylitol, but did you know that xylitol is also found in toothpaste, shampoo, and sportswear—surprisingly, this sugar alcohol is used as a cooling agent in T-shirts and other clothing. And, while your dog is unlikely to chew a bottle of shampoo, other xylitol-containing items are more likely targets, especially for young puppies who will chew and swallow many items, including clothing. The following household items may contain xylitol:

See a more exhaustive list of xylitol-containing items here. This list will likely grow as more human health benefits of xylitol are discovered. In addition to providing sweetness with fewer calories than sugar, xylitol has a low glycemic index, is antibacterial and can prevent infection, and may slow osteoporosis and fight cancer—in people. For dogs, xylitol’s effects are deadly.

One way that xylitol harms dogs is through hypoglycemia. The canine pancreas mistakes xylitol for sugar, and releases three to seven times the normal insulin amount. The blood sugar is suddenly and profoundly lowered, resulting in weakness, vomiting, disorientation, tremors, collapse, and seizures. Hypoglycemia can occur 30 minutes to 12 hours after xylitol ingestion, and can last for more than 24 hours. The amount of xylitol in gum brands can vary substantially, from less than a milligram to 1,000 milligrams, and depending on the gum type, a small dog may easily be poisoned by ingesting only one piece.

The second way xylitol hurts dogs is by destroying liver tissue, because the hepatotoxic dose of xylitol is higher than the hypoglycemic dose. Some dogs do not experience hypoglycemia before developing liver damage, whose signs take longer to show up—typically 8 to 12 hours. Some dogs experience only temporary illness, but some suffer acute, complete liver failure and death.

If your dog may have eaten a product containing xylitol, immediate veterinary care is critical. The FDA reports that dogs have died one hour or less after ingesting xylitol. Bring the product packaging if possible, so we can estimate the amount of xylitol your dog ingested. Ideally, vomiting is induced 30 minutes after xylitol ingestion. Xylitol toxicity patients are usually hospitalized on an intravenous glucose drip, and their blood sugar, liver enzymes, and blood clotting are closely monitored. Dogs who absorb a high xylitol dose, despite our supportive intensive care, may develop hepatic necrosis and not survive.

Additional Information about pets and xylitol 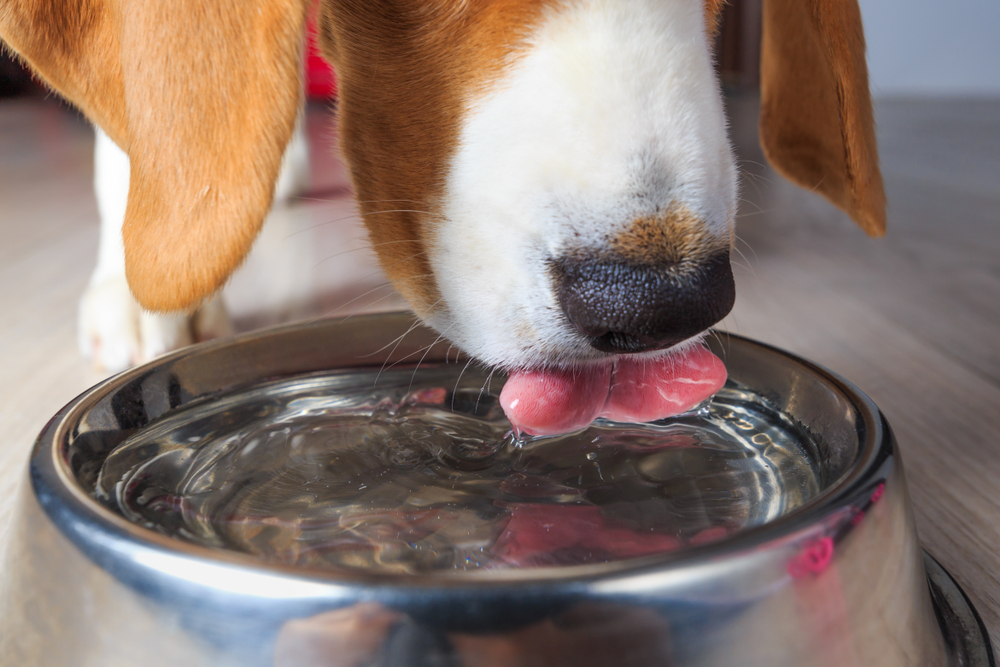 No xylitol toxicity cases in cats have been reported so far. Some dental mouthwashes and water additives for dogs contain xylitol, but used according to label directions, should not cause problems unless the dog is drinking excessive amounts. The ASPCA Animal Poison Control Center is a great resource if questions arise about xylitol and your pet. The poison control consultation fee is waived if your pet’s microchip is registered in the HomeAgain program.

Since the serious threat of xylitol toxicity is well-known among veterinarians but less known among pet owners, the American Veterinary Medical Association supports the Paws Off Act. Introduced in the U.S. House of Representatives in the fall of 2021, the act calls for a dog safety warning label on food products that contain xylitol. The bill was inspired by a family’s beloved Samoyed, Wolfie, who died despite emergency care 36 hours after ingesting a container of xylitol-sweetened gum.

Call the Premier Pet Hospital team with any questions or concerns that arise about xylitol toxicity. Share this Food and Drug Administration video about dogs and xylitol with your dog-owning friends. We hope that increased awareness of xylitol toxicity will decrease dog exposure to these common household products—and save canine lives.

About the Author: Premier Pet Hospital